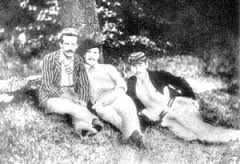 Born in Walsall of Indian and Welsh stock, and educated there and at Oxford, David Bagchi is an academic now based in Hull. Starting out as a historical theologian he recently became, in what he describes as a shock career move, a theological historian. In 2010 he started pressing the wrong keys on his laptop, and two years later his first novel, a Tudor conspiracy thriller, won the TBS Novel Prize.

Barbican Press published The Mystery of Briony Lodge in Autumn 2014. For three Victorian slackers—to say nothing of their dog—becoming Sherlock Holmes’s neighbours was very nearly the death of them. In this mash-up of Sir Arthur Conan Doyle and Jerome K. Jerome, their best-loved creations collide chaotically—with Mrs Hudson, as always, left to pick up the pieces.