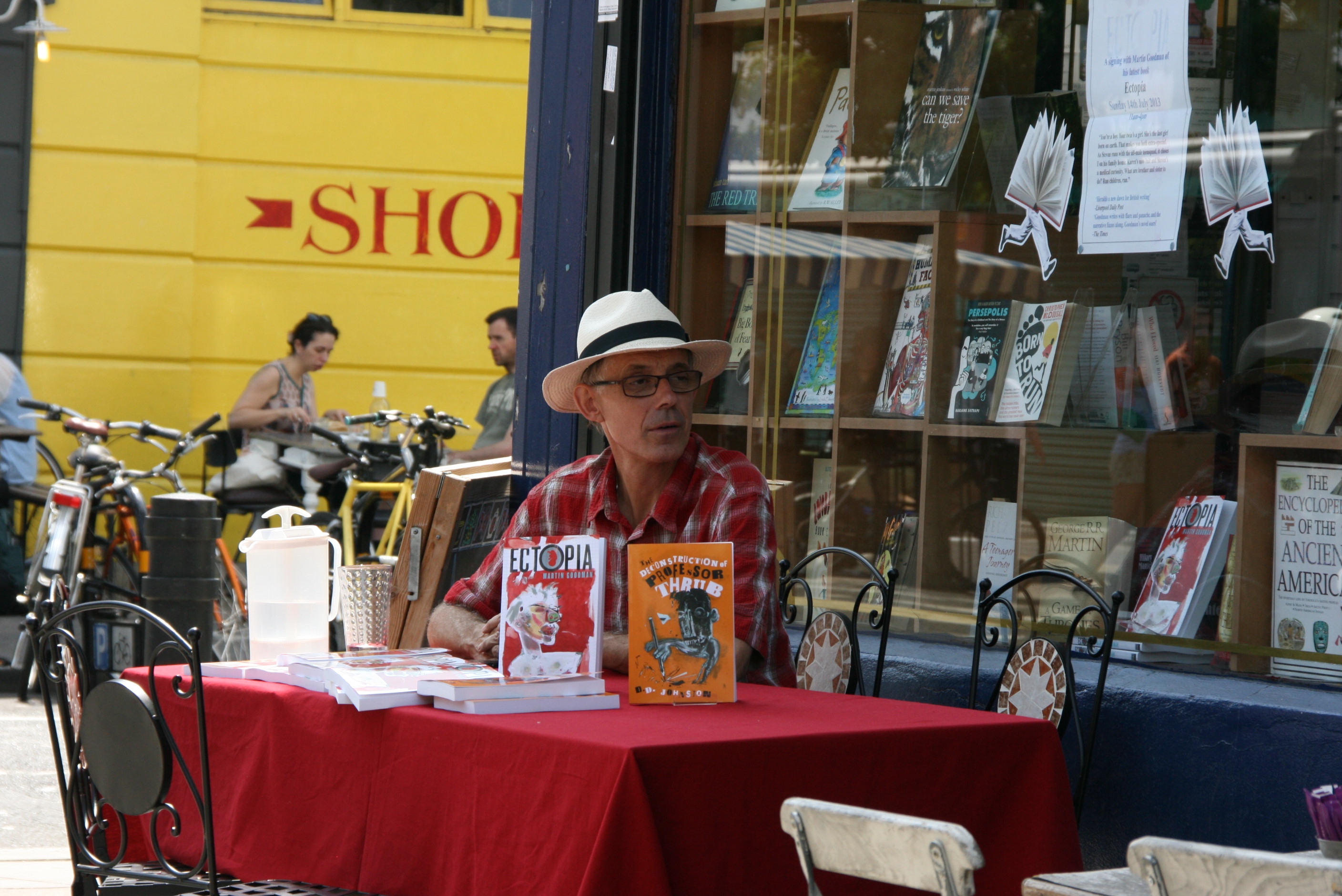 From Creative Writing PhD to novel – Ectopia and the process

Q: You wrote Ectopia as a PhD. Why?

Martin Goodman: I wrote complete drafts of the book before any Creative Writing PhD came into existence. They were sent out into the world by top agents like Mic Cheetham and Deborah Rogers, and kept coming back. I told Deborah to forget it and I would write her a novel that would sell instead – On Bended Knees.  That worked. Editors’ responses showed Ectopia was already too edgy for the mainstream. I didn’t want to trim it back and compromise it. The PhD gave me some really tough and knowledgeable readers, top lecturers in a top university,  whose job was to push me beyond my limits. Nothing I could write was going to scare them. They had to make sure it was good enough to get through a viva. It made no difference to them whether it sold or not. The times I kept going back to this book, starting it from scratch,  meant it was elemental in some way, one of those books I had to write.  The PhD was my commitment to doing that as well as it could be done.

MG: Part of a PhD is that it pushes the field forward. To do that you have to study the field. It’s called action research. You read those writers who have been brilliant at what you’re trying to do, and see what you can learn from them. I was writing a dystopia, so I checked in on classic dystopian fiction … Zemyatin’s We, Brave New World, 1984, Clockwork Orange, The Handmaid’s Tale, Oryx and Crake, Never Let Me Go and lots more. They helped me answer questions, and find ways to go and not to go.

MG: Writing about the future, you need a new language. You don’t want it dated and you don’t want it obscure. Clockwork Orange showed ways to go and not go. The final chapter of The Handmaid’s Tale is set way in the future and treats the novel as a found and ancient text. I was going to do that too, and this taught me not to bother. Oryx and Crake ends without a resolution – it leaves the reader to decide. I’d done similar things with my own books, but as a reader I was unhappy with Margaret Atwood’s decision, so I chose to write a proper ending. A lot of dystopian fiction, from Huxley through Orwell to Atwood to Ishiguro to Ray Bradbury, is secretly about a writer’s sense of threats to their livelihood and a state’s attack on literature. Once I recognized that, I decided to avoid it. The references in those 20th century books are literary. In Ectopia, they are filmic. My teenage character isn’t me. I’m into books. Film’s where he’s at.

A: You’ve posted an  ‘exegesis’ on the Barbican Press website. [Find it here.] What’s that about?

MG: For the PhD you write 20,000 words about the process of writing the novel – the ‘exegesis’. That’s when the process can get academic. I’m a novelist. I invented this character of an academic and wrote in that voice.  It wasn’t good enough. Literary critics do a much better job. My supervisors at Lancaster University, Graham Mort and Lee Horsley, kept pointing it out to me. My expertise, they kept pointing out, was in being articulate about my own process. So that’s what I did.

Q: Was the PhD funded?

MG: I paid for it myself. I did it in distance learning mode, which meant I could continue my day-job as a secondary school teacher. It was hard work, but worth it. Part of keeping sane as a writer is keeping the creativity flowing, not letting the day job swamp it. The PhD gives that discipline. If you’re working and writing like that you have no time for holidays and a social life, so you save enough to pay for it.

Q: Why did you call it Ectopia?

MG: I ran with a lot of titles. That one stuck. It sounds like dystopia and has a classic ring to it. Read to the end and you’ll discover the medical links as well. For me it’s got another meaning. ‘Ectopia’ is the state of being on the outside of things. Writers have that marginal sense – themselves as witnesses rather than participants; books as more real than life. Being gay adds to marginality – and Steven, the main narrator of Ectopia, is the gay brother of the last girl. A big part of my finding the courage for this book was reading all the novels of James Purdy and then flying to New York to interview him. He was my favourite living writer and one of those gay writers who influenced me …  like Patrick White, Paul Bowles, Jane Bowles,  Patricia Highsmith, Francis King, Denton Welch. His books never compromised. He wrote from the heart of himself and against the grain. it was an ectopic life and, in writing terms, as rich as they come.

Q: You say it’s narrated by a teenager. Does that make it a teenage book?

MG: It’s a book about teenagers. Teenage readers who are into edge fiction should enjoy it. ‘Teenage fiction’ is an adult label though – it’s censorship. it says this book doesn’t cross limits about sex and drugs and language and violence and whatever. Ectopia does cross all those limits.  I didn’t censor the book when writing it so I’m not going to start censoring it now. It’s a subversive book. If I was censoring it, I’d probably give it a 15 certificate.  Pre-teens shouldn’t go near it.